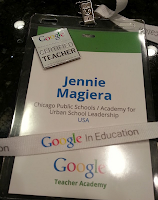 As part of our participation in the Google Teacher Academy: New York, all new Google Certified Teachers were tasked with creating an Action Plan. According to the guidelines, the purpose of an Action Plan is to share innovative practices with colleagues in their community and around the world. We had a few benchmark dates - a check in mid-year and a final reflection. This post (posted on the 2 year birthday of this blog!) is to serve as that "Final" Reflection... though it feels odd to call it "final" as I feel that I'm just getting started.


My Action Plan was originally to "Googlize Our Schools". That is, I aimed to leverage Google Apps for Education to increase collaboration, creation and productivity for all students, teachers and administration my network's 25 Chicago Public Schools. Six months later, I'm pleased to say that the action plan has been quite successful! I supported schools in moving to Google Drive as a better means of collaborating both in the classroom and between colleagues in lesson planning. I introduced Google Hangouts as a platform to better facilitate PLCs and grade level meetings. We've piloted over a dozen Chromebook carts, including several 1:1 classrooms. I've created Google Sites for most of our schools to streamline communication. We've begun to employ Google Scripts such as Autocrat, Doctopus and FormMule to automate and improve our daily practices. While these are only a few examples of how we've Googlized Our Schools, this work has been but a slice of what I was driven to do after GTA:NY. 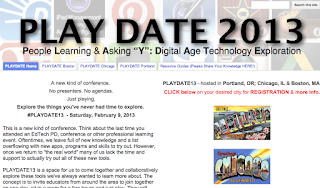 Inspired by the whirlwind experience that is a Google Teacher Academy, I began to rethink professional learning models and focus on the value of hands-on exploration. Consequently, after brainstorming with my #BurNTA colleagues, we created a new kind of professional learning event, PLAYDATE. While this was an awesome day, full of Google exploration, and even a Demo Slam (we called it the "PlayOff"), my "Google drive" to do more was not yet sated. (yes, pun intended)

I was also honored to join the next Google Teacher Academy in Mountain View as a lead learner. During this experience I met four amazing new GCTs - Monte Gaukler, Danielle Filas, Lori Ferrington and Ashley Cross. We decided to combine our passion for EdTech, collegial learning and general geekiness to create a yet-to-be released YouTube channel to support our colleagues near and far... stay tuned for more details :). 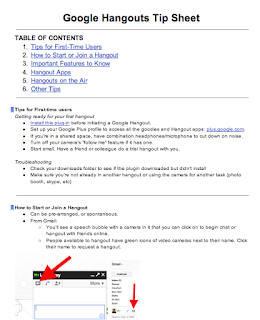 More recently, I was able to revisit an idea generated at GTA:NY. In the second day of that event, during an unconference session about Google Hangouts, I had voiced a concern that while Google Hangouts are invaluable tools, they are often difficult to get set up for some of our more technophobic teachers. I invited my colleagues at the table to collaborate on a Google Doc to support newbie Google Hangout participants. While everyone was excited about it in the moment, once we all returned home and work/life obligations took over, we set the idea aside. Thanks to some tweets from Amy Mayer and Genevieve Gallagher the project recently got a much needed second wind. After a few weeks, we were able to create this Google Hangout Tip Sheet!

These are just a few of the many mini-action plans that have sprung up since my experience at Google Teacher Academy: New York. While I am constantly energized by these projects and ideas, the real win has been the connections I've made along the way. Monte, Danielle, Lori, Ashley, Amy, Genevieve - and so many countless others - have all been the energizing force behind a lot of what I've been doing. And I wouldn't have known them without the GTA.

So what's next on the horizon? Oh so much more... only time will tell. The one sure thing is that I'll be collaborating closely with a colleague met through one of these networks.
Posted by Jennie Magiera