I've been quite intrigued with Dan Meyer's Any Qs on Twitter and his Three Acts method of teaching math as described on his blog. This year, we've been showing his Any Qs videos as part of our math morning meeting. The students use an Edmodo discussion stream "back channel" to send in questions the video makes them wonder. Then we discuss and consider ways we'd move into an "Act 2" to solve the problem. As we're still developing our problem solving skills, we had yet to actually pick a question and solve it. Thus far it has been an exercise in curiosity, and developing a real thirst for mathematics. 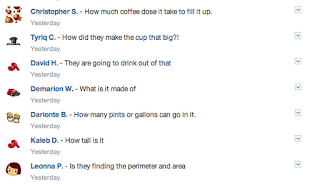 Yesterday we took the big step into Act Two. We did the same as usual, showing a video and asking questions through our Edmodo discussion screen. We watched the first act of Dan's 3 Acts lesson, "Hot Coffee". After the students watched this giant coffee cup began to fill, inevitably many began to wonder, "How much Coffee can fit inside of it?" (among many other great and hilarious questions, as you see here). 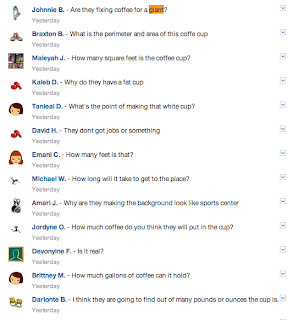 The students wondered aloud for awhile, a few shouting out guesses and telling their neighbors wild estimates. Then I showed them the general dimensions of the cup. Dan's site lists 7 ft x 7 ft, but I changed it to 8 ft x 8 ft since it gives a more manageable answer (his original lesson includes standards for 6-12 students so while I knew that my 4th/5th kids could definitely rise to the occasion, I also wanted to scaffold it slightly). They began to grapple with the concept and discuss what information they needed, what information they did not need and what they had to do to solve the problem. Since the question they asked didn't involve the word "Volume" it was interesting to see that many students didn't immediately go there. They wondered first about surface area, circumference and the diameter.

After/towards the end of the second act, I also gave them the conversion rate and rounded it to 1 cubic foot = 7.5 US customary gallons. They had been learning about conversions and so were happy to take this new piece of information. However, some quickly forgot about it in their problem solving journey, leaving the answer in cubic feet, while others ran with it. As students caught on, the path to solution began to catch like wild fire. They were excited to share their strategies and even more excited when their strategies yielded results.

In the third act, as they problem solved, I had them use the app Educreations to capture their thinking. They created short screencasts to show their math metacognition and help them keep track of the process. Here are a few. Note that they did not use microphones nor did they have a stylus.

My students and I really enjoyed this way of presenting problem solving; we are going to apply it to more and more of our curriculum. I thank Dan Meyer for being so open to sharing his work with the world! 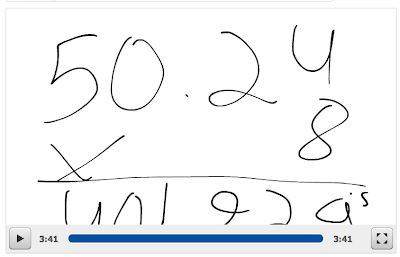 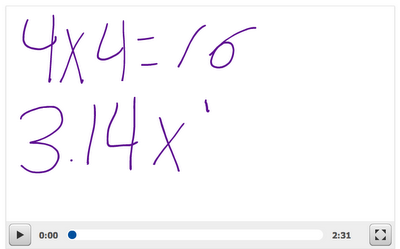 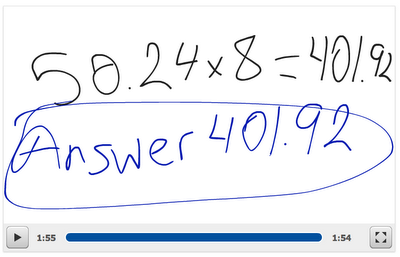