My Brave and Amazing Colleagues 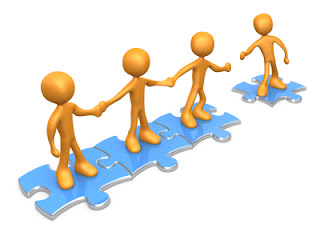 As mentioned in an earlier post, our school has the great fortune to have expanded our iPad program from one classroom last year to 9 classrooms this year. With this expansion, my role has changed from a classroom teacher and new teacher mentor to classroom teacher/new teacher mentor/STEM coach/tech coordinator/iPad program lead. While this was also an intimidating prospect, I was excited to begin the year and learn with my new iPad colleagues.

As with any expansion, I expected there to be some growing pains. I also expected there to be amazing learning and progress on both the part of the teachers and students.  Well, I expected amazing, but what I got was awe-inspiring. These new iPad teachers have taken simple suggestions, quick overviews of SAMR and innovation philosophy, and a handful of quality apps - and each have created their own innovative learning spaces. What I'm most impressed by are two teachers who originally were self-proclaimed technophobes. They both saw the potential in bringing iPads into their classrooms and were both excited at the opportunity; yet neither had experience with these devices nor the Mac operating system in general. They expressed great fear and discomfort with the new technology but applied for the iPads nonetheless.

What has set this cohort of new iPad teachers apart from others are 3 main things:
- willingness to learn a new skill set and go "back to basics" / coachability
- perseverance despite frequent frustration
- creativity & collaboration


Willingness to learn a new skill set and go "back to basics" / coachability
I recently wrote this post about the necessity to break down your notions of teaching and learning and rebuild it with an effective use of available technology (rather than trying to insert technology into your existing framework). This means that veteran, successful teachers will experience a period (sometimes a long period) of feeling like a first-year teacher. This isn't comfortable and oftentimes takes a blow to your self-esteem as a practitioner. Furthermore, teachers who are used to being the expert in their field - the person to whom others go to for support - are suddenly having to be coached. While in theory one may argue that we are never done learning our craft and teachers should be used to ongoing coaching no matter their level, this isn't always the case. There are teachers who are seen as "master mentor teachers" and have rarely been on the other side of the table.

A good many of my colleagues who embarked on this iPad expansion were considered "master mentor teachers". Their classrooms ran themselves and their students ended the year self-motivated, thoughtful scholars. We all look to them for examples of best practice. And yet once we added iPads to the equation, they were suddenly facing areas of complete ignorance - how do you close a window in Safari? How do you right-click on a Mac? What is screencasting? How do you sync an app, let alone multiple apps? What is iOS?! Each of these teachers jumped in with two feet - not only willing to learn and start anew, but positively hungering for the new information. This was the first key step to their success.

Perseverance despite frequent frustration
As I've chronicled in this blog, bringing in the iPads to my room last year resulted in lots of "hiccups." And perhaps a few more dramatic issues. I lost entire unit of writing that my 50 students had been working on by overwriting the files in the iDisk. I thought I had synced an ePub to all the iPads during an observation and realized I had not... and had nothing else planned for that period. I didn't realize a website ran on flash and had created my lesson around it. You know, that sort of thing. There were many times last year where I wanted to throw my hands up in the air and declare - "I GIVE UP!"

This is where my colleagues now find themselves. The kindergarten teacher recently had to sync a new app to all of her iPads. After completing a few, she checked an iPad and the data from one of her key apps - SmartyPantsSchool - was seemingly wiped clean. Three months of individualized assessment data for her 28 kindergarteners, gone. Possibly worse - each of her students would now have to start over despite all the progress they had already made. Instead of panicking, or throwing in the towel, she took a deep breath, turned to her co-teachers and starting working out a Plan B. I was amazed by how she took it in stride and persevered despite this blow. In the end, we were able to recover the data and move on!

Creativity & Collaboration
iPads in the classroom is still a very young field; there is not a lot of published data to point the way to best practices or models for integration or redefinition. Therefore a lot of this is about making it up as you go - and when you run into a road block, getting creative. These teachers have each taken it upon themselves to read blogs, email me or their Apple coach, Tweet, Facebook, etc - to find new ways to solve old problems. What's more is that they are even beginning to share their journeys with others. The kindergarten teacher - one of my two self-dubbed technophobes - has taken her coaching sessions with me and her own dogged persistence in learning the operation of the Mac and iPad OS and begun to chronicle her learning in her own blog. After a quick Google Hangout and a few in-person tips, she is now not only creating her own screenshot documents for her Kindergarteners to track their own data, she has transformed into a newborn EduBlogger! (Check out her amazing journey at iPads in Kindergarten!)

I've seen other models - both this year and last - which have had less success. I've found that this has had little to do with the quality of the teachers (although this does play an important factor - inserting iPads into an already dysfunctional classroom may only exacerbate the issues). Great practitioners have been lucky enough to gain access to a 1-to-1 set of iPads only to use them as a reading games center for 15 minutes a day. What has pushed this expansion forward has been a testament to the amazing disposition of the 8 teachers I am so lucky to work with on this amazing project. I hope to loop in more of our talented staff soon and that these 8 can go on to mentor them in their iPad adventure.

Posted by Jennie Magiera No comments: 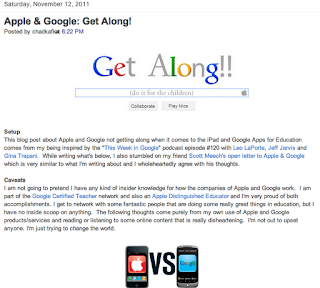 I've long said that Google and Apple should get together and have a baby. A Gapple. Or perhaps an Appgle. Or a Goople? Whatever you'd call it, both companies offer some amazing products for the classroom that would be better off working together instead of against each other.

My friend and fellow Apple Distinguished Educator, Chad Kafka (who is also a Google Certified Teacher), has written this informative yet persuasive blog post that eloquently calls for a union between these two tech giants. He brings up many good points and shares some interesting facts about their relationship. After reading it, all I could say was, "Yeah! What he said!"

Take a look and join the cause!
Posted by Jennie Magiera 4 comments:

PaperPort Notes is Out! (Noterize 2.0) 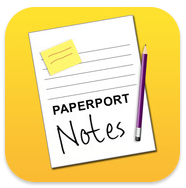 For those of you who have been waiting for the Noterize (PDF annotation app I recently blogged about) update... it's here! And free!

So exciting. Get 'em while they're hot!
Posted by Jennie Magiera No comments:

Email ThisBlogThis!Share to TwitterShare to FacebookShare to Pinterest
Labels: Apps

Kids Kinect in the Classroom 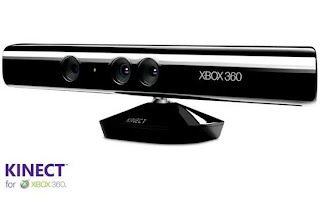 On Friday a colleague and I went to the Microsoft Training Center to learn more about how we could use the XBox Kinect in the classroom. I'm not going to lie; I was extremely skeptical. In considering this tech against my recent obsession with the SAMR innovation continuum, I felt that the Kinect was barely on the second level (augmentation). It seemed little more than an elaborate gimmick to engage kids, further limited by the fact that it could truly only engage 1-2 students at a time.

As we participated in this day-long training, I began to feel that my doubts were justified. The titles offered - Kinect Sports, Body and Brain Connection, Once Upon a Monster and the upcoming National Geographic game - were all interesting but seemed to lack true educational substance. The Body and Brain Connection, for example, has some good algebraic concepts involved, but certain levels could allow a child to guess consistently and attain a high score. 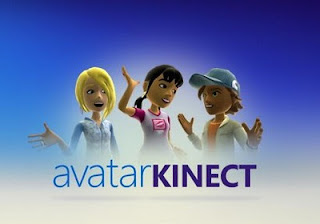 It wasn't until the afternoon that I began to change my thinking. The presenter explained how counselors were using the XBox Live's Avatar Kinect to allow students to discuss their issues anonymously. Think of a confessional in which you speak through a curtain - however this curtain is the XBox Live environment and you get the added benefit of an avatar that translates your facial emotive moves, body movement, etc. The wheels began to turn and I started chatting with a colleague from another school about integrating this concept into our Social Emotional Learning periods such as Morning Meeting.

What if my class submitted issues from within our classroom community, and the students from my friend's school discussed them - and vice versa. Then on a designated day each week, we could meet up in our Avatar Kinect environment - protected by anonymity - to offer possible responses to these classroom community issues. We could further the concept of "walking in someone else's shoes" by having students appear as avatars contrary to their body type, race or gender.

I see my students also utilizing their iPad technology to blog about their reactions, participate in back channel discussion about what they are observing or participating in and sharing audio/visual artifacts with their peers in the XBox Live Avatar Kinect.

Another interesting thought is the taking advantage of Kinect SDK (software development kit) to build apps better suited for the educational environment. Johnny Kissko, an ADE friend and tech whiz, has created the website Kinect Education to promote the creation and sharing of Kinect for education apps. I hope to learn more about this but know I have a ton to learn about programming before I could dream to do this myself. I can, however, dream of apps that could be made: A dynamic geometry app in which my students can unfold polyhedrons into their nets, then refold then and explore volume, surface area and geometric features (edges, vertices, etc.). A celestial exploration in which students are walking across the surface of Mars, floating through the asteroid belt, digging through the chemistry of the sun. A number sense activity where students create arrays and divide quantities into groups - using their bodies.

Calling all Chicago Area Teachers: Are you looking to to be inspired, encouraged or enriched? Need some fuel to re-energize your classroom and practice? Here is a great professional learning opportunity for you! I'm proud to be speaking about technology at this event (doing a 15-minute Keynote TEDTalk in the opening session), and am excited to see what other workshops have to offer! Hope to see you there!


Posted by Jennie Magiera No comments: